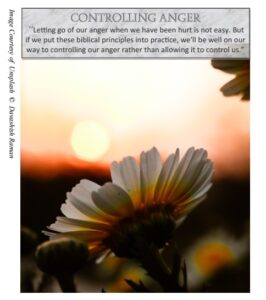 I once had a friend who would say, when she was really mad, “I’m not angry, I’m just disappointed.” It was obvious to everyone around her that she was seething inside. But she felt she couldn’t admit to being angry because she was a Christian, and Christians don’t get angry, do they? Yes they do!

The Bible is very forthright about the fact that we will get angry at times in our lives. And that inevitable anger is not necessarily a sin. In fact, when handled rightly, it can be a legitimate, God-given tool that fulfills a definite purpose—to move us to take action to correct the situation that caused our anger in the first place.

So, it’s not wrong to be angry. But where we do go wrong is when we allow our anger to control us instead of us controlling it. And the first step to taking control over our anger is simply to acknowledge that we really are angry. ~Ron Franklin  (part 2 0f 6 from his article Five Biblical Steps to Controlling Your Anger )

The Grip of Anger