Skip to content
Posted inBulletin Bits
Posted by By Deanna Rittinger May 29, 2022 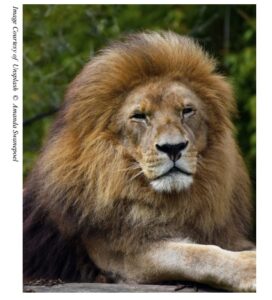 Lions are mentioned in several contexts throughout Scripture, sometimes positively to describe God (Hosea 11:10) and sometimes negatively as symbolic of evil and destruction (Proverbs 28:15). Peter compares Satan to a “roaring lion” and warns us to beware of the enemy’s schemes that will destroy us (1 Peter 5:8). A lion’s roar can be heard up to five miles away and is intended to terrify all who hear it. Lions roar to establish their territory and to communicate their power. But a roar can do nothing. It is threatening but powerless unless we give in to fear and allow the lion to overtake us. Our enemy, Satan, roars his threats, doubts, and accusations in an effort to terrify us into giving up so he can defeat us (Ephesians 6:11–16). But even the threat of a roaring lion cannot overcome those who stand firm in the armor of the Lord (Romans 8:37).

The Bible uses hundreds of metaphors and images to describe the indescribable God Almighty. Animals and other forms of nature can help us understand specific aspects of God’s character. Jesus is called the Lamb of God (John 1:36) to illustrate His gentleness and willingness to be the sacrifice for our sins. But He is also called the Lion of the tribe of Judah (Revelation 5:5) to display His absolute authority and power over all creation. A lion may be king of the jungle, but the Lion of Judah is the King of kings. ~ S. Michael Houdmann

Tags:
BookCharacterDavidGodImagesJudaLionsMetaphorsOpenPowerPrevailedRoaringRootSealsTribe
Last updated on May 26, 2022

We Wait for the Dawn
Scroll to Top