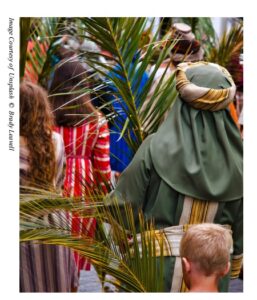 The man the crowds followed healed the sick and performed miracles. It seemed he had the favor of the world on him. But shortly after arriving in Jerusalem, Jesus became more and more a source of controversy. He overturned tables in the temple and drove people out with a whip; he spoke in confusing parables and talked about dying. The people began to doubt and the Pharisees fueled it with their own darkened hearts. Their promised king wasn’t supposed to die, he was supposed to conquer the Roman Empire and be, well, a king. They had an idea of what God was going to do and how he was going to do it, and Jesus didn’t meet their expectations.

We all have the tendency to put God inside a box. We predict how he’s going to move in certain situations, and it can challenge the very core of our beliefs when he doesn’t meet our expectations. Our struggle might be confined to just one aspect of our faith, like finances or a troublesome relationship. We can believe God in some ways but not others. Robert Robinson wrote in his famous hymn Come Thou Fount, “Prone to wander, Lord, I feel it, prone to leave the God I love; here’s my heart, O take and seal it, seal it for thy courts above.” The question is, will we be faithful when God doesn’t show up the way we want him to? ~The Skit Guys

Easter Sunday: What is a first fruit?
Scroll to Top