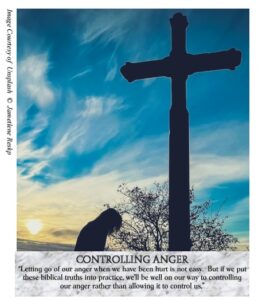 Set Your Will To Forgive

Ultimately, there is only one way to escape the deathly grip of anger when we have been deeply hurt, offended, or frustrated. Sooner or later, we have to forgive the person we think was at fault.

Colossians 3:13, says “bearing with one another, and forgiving one another, if anyone has a complaint against another; even as Christ forgave you, so you also must do.”

The key to being able to forgive is understanding that forgiveness is not a matter of how we feel about the person, but of making the heart commitment to no longer hold their offense against them. In effect, we make the decision to release them from the moral debt they owe us because of whatever they’ve done to us. And that decision doesn’t depend on how we happen to be feeling toward that person. It’s a commitment of the will.

Here’s an example. When I married my wife, the pastor who conducted the ceremony never once asked me how I felt about marrying her. But he very definitely asked if I was willing to commit myself to her “for as long as you both shall live.” Once my bride and I affirmed that commitment, the pastor pronounced us husband and wife. The foundation of our marriage relationship was not how we happened to be feeling, then or since, but the commitment we each made by an act of our will to one another and to God.

In the same way, when I make the heart decision to forgive, and set my will to no longer hold what someone did to me against them, God registers my forgiveness in heaven. And it doesn’t matter how I feel about it.  (Part 3 of 6 Five Steps To Controlling Your Anger by Ronald E. Franklin)

Easter Sunday: What is a first fruit?

Pray the Prayer of Forgiveness

No comments yet. Why don’t you start the discussion