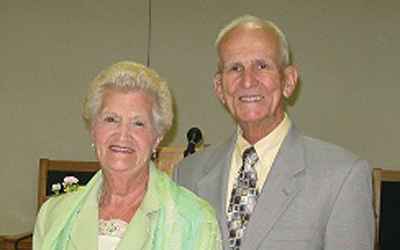 Presently the Foxes are working in Concord, NC seeking to establish another Spanish speaking ministry.

The normal attendance at their new church is 12-15 on Sunday morning. The Foxes are presently working through some difficulties and would very much appreciate your prayers.

Mervin and Norma Fox were both saved in September 1967 while living in Illinois. After serving for seven years in their home church, God called Pastor Fox to Bob Jones University to train for full-time ministry. So, in 1974, they sold their house, he quit his job and they moved to Greenville, SC with their three children. After finishing school and deputation, the Fox family flew to the Azore Islands (Portugal) on June 26, 1979 to begin their missionary ministry. Pastor & Mrs. Fox served the Lord in Portugal for 22½ years before returning to the States to pastor an American church in Chesapeake, VA.

In early 2004 Pastor Walt Coles asked if Mervin would be willing to help GNBC establish a Spanish speaking  church. That was the beginning of The Foxs’ transition from Portuguese to Spanish. After a little more than three years, Mervin left the growing Spanish ministry to the leadership of Kevin Brown.

In 2007 the Foxes moved to Charlotte, NC where they worked with Pastor Ron Allen at Bible Baptist Church. Pastor Allen had prayed for a couple of years for someone to help his church begin a Spanish Speaking ministry – God sent the Foxes.

While in Chesapeake, a pastor friend asked Pastor Fox to help him establish a ministry to reach the Hispanic community for Christ. Through Good News Baptist Church in Chesapeake, the Lord enabled the Foxes to establish a thriving Hispanic ministry, and after two years were able to leave that ministry in the hands of another pastor to head to Charlotte, NC, where the Lord called them to begin another ministry to reach the Hispanic community. Pastor Fox knew there was a great need in Charlotte to reach the 10,000 plus Hispanics that live in or near the city. He is now pastoring Iglesia Bautista Bíblica, the Hispanic ministry of Bible Baptist Church, which began March 2, 2008.

After three and a half years the Foxes left that growing work to the leadership of a Mexican pastor.